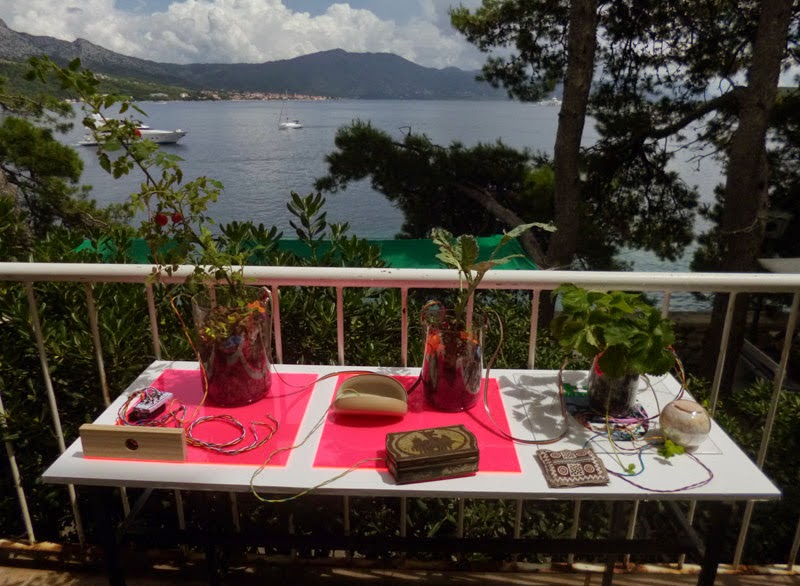 Like many other Ian's works, this one too engages with the idea that everything is interconnected. This idea is found in indigenous and islander's nations, in notions around integrated systems, systems thinking, cybernetics and permaculture. It involves exploring the boundary between human and machine, and plants and human. In World Tree Orchestra: tiny garden live data readings from the plants control what audio is heard and how the LED's flashes. The set up consists of three main parts (three plants in three containers). One part is measuring the amount of blue and green light in the air, and the LEDs blink the data values. As it happens, in the photosynthesis process plants use light at the red and blue ends of the spectrum. Green is unused and discarded, which is why most photosynthesising things are green. Temperature is measured by the middle plant, and the value is blinked out and chirped out through a tiny speaker. The third plant is being measured for its voltage level. When plants move nutrients around, this creates a small amount of flow which can be measured. The data is then blinked out and chirped out. In Aotearoa New Zealand we call this system 'kihikihi' which is the Maori word for cicada. A range of side components are used in the installation: contemporary plastics sit along side wood, souvenirs of Fiji, an Edwardian chocolate box, household containers, recycled plastic bags, plants and electronics. The aim with this was to make a small scale integrated system that by extension unfolds out to the world outside, through the tendrils of culture, consumption and connection.

Pierre Proske: Brickets
interactive audiovisual outdoor installation
The Brickets project is a cybernetic investigation into the dynamics of synchronisation in nature. Fireflies blink mysteriously in unison while the electrical cells in our hearts synchronise causing an electrical pulse also known as a heart beat.  These small electronic devices equipped with light, sound and radio communication chatter among themselves to the mysterious dynamic of self-sychronisation. The Brickets are self-sustaining using solar power to drive their circuits and awaken at dusk due to their in-built light-sensors.

Shannon Novak: String Section
interactive audiovisual AR installation
String Section transforms a wall into an interactive musical instrument. The audience can hold their own mobile device (smartphone or tablet) up to a series of geometric forms to trigger different musical notes, in this case, notes as played by a group of orchestral strings. The geometric forms also animate in real time through the screen on the mobile device using augmented reality, and there is the ability to create musical scores alone or with others using multiple devices. There are moments where the work alludes to Lucio Fontana’s suggestion of another dimension beyond what is seen, the use of line through space in Anthony Caro’s sculptures, and the geometrically rigid yet lively animations of Oskar Fischinger. The work presents a new musical language that has the potential to appear in nearly any location, over almost any object, and at practically any scale. 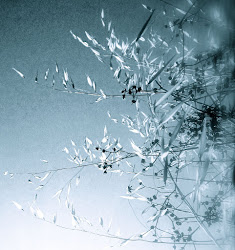